“The bourgeoisie cannot exist without constantly revolutionising the instruments of production, and thereby the relations of production, and with them the whole relations of society. Conservation of the old modes of production in unaltered form, was, on the contrary, the first condition of existence for all earlier industrial classes. Constant revolutionising of production, uninterrupted disturbance of all social conditions, everlasting uncertainty and agitation distinguish the bourgeois epoch from all earlier ones. All fixed, fast-frozen relations, with their train of ancient and venerable prejudices and opinions, are swept away, all new-formed ones become antiquated before they can ossify. All that is solid melts into air, all that is holy is profaned, and man is at last compelled to face with sober senses his real conditions of life, and his relations with his kind.”

So you live in an environment like that, plus everybody has been basically frightened into individual preservation at the possible expense of solidarity with others, partly because solidarity with others has been made much more difficult than it used to be. Trade unions have been systematically undermined, and people like academics …

(I’m not an academic by the way, I’ve never really been an academic. I was the distance education tutor for Birmingham University whilst I was a care worker. The main job I had in life was being a care worker. That quite matters to me, because I think on the whole, that the academic part is a bit futile. It’s a way of creating elites.)

In many ways autistic people – because we’re stubborn, single-minded – have certain priorities which other people don’t necessarily share. It can be quite annoying, but this is actually a very valuable role in the world. I’m going to claim that for autistic people, and generally weird people, and everybody who just sticks their neck out and goes: “Oi! That won’t do! – this is how – look – listen to this – this is just – think about it for a minute, and so on.

We can’t get the solidarity in the workplace. And we can’t, therefore, own industrial power in the same way.

“In the social production of their life, men [people] enter into definite relations that are indispensable and independent of their will, relations of production which correspond to a definite stage of development of their material productive forces.”
Marx, A Contribution to Political Economy

I think Marx would have recognised that technology is going to make a big difference to what the available possibilities are. I think technology has given us the potential to own the production of knowledge and do something about getting people to understand the context of what they’re seeing around them during the crisis that’s going on now – in terms of the tremendous insecurity, the farcical greed, the appalling assignment of rights over people’s health and well-being to private enterprises which are devoted to profit.

It’s been very revelatory. ‘All that is solid melts into air’: that’s what’s happened. Lots of people have come to a moment where they are compelled to face with sober senses the real conditions of life. I think that we are at a stage where a lot of people are confronting that their values have been very skin-deep and market-dominated. People have been given a strange opportunity to just exist for a while and to notice that they’re alive, and to notice that where the money’s going and the research is going to deal with this crisis, has been very strongly influenced by capitalist considerations of profit.

Medical professionals all over the world are not quite becoming socialists, but are understanding why people would. It’s a very interesting situation and I would love to have Marx around now, to do an analysis of things like the gap between the vested interests of the folk who are really getting richer and the very threatened, very precarious existences that most people are facing now: especially people who are not regarded with respect and are not prioritised when it comes to the provision of a worthwhile life.

It’s not just old people in care homes who have died during this crisis, there are a tremendous number of people with learning disabilities and other disabilities, including autistic people who don’t speak and are really perfectly capable of enjoying life. In a way, it provokes in me a suspicion that… I wouldn’t call it a conspiracy, because I don’t think too many people needed to talk to too many other people to make agreements – but kind of a nod and a wink, that those social care bills are very large, an awful lot of people are dependent on this money, we could cut the social care bills wonderfully if they would drop dead. Sorry it seems over cynical but I’m not alone in thinking this – and that includes some of these doctors.

Sweden has stopped being a socialist country, and said that anybody over 65 [with Covid] should be sent into an old people’s home with palliative care and not treated for the illness. That was their official policy: if you’re gonna die just go home and die, and that’s fine by us. We’ll give you morphine to make it all less awful.

Let’s try to get some of the nice stuff, which is about why we [autistic people] are good productive irritants.

Somebody’s done some research into the moral preferences – when a bunch of autistic people were asked, and other people were asked, to rate loyalty, authority, purity, care, and fairness. Typical people tended to prioritise loyalty, authority, and purity, and autistic people tended to prioritise care and fairness.

We’re often accused of lacking a theory of mind, or being unable to read minds – as though most people could read minds! it’s just a nonsense idea – and what they’re really talking about is the fact that most people most of the time have yoked together their sense of reliability and their sense of how the world is supposed to be, with position. So purity is about boundaries; authority is about hierarchies; and loyalty is about boundaries and proving that you care more about these people than you do about those other people.

That’s a fascinating trend. We don’t do the simultaneous negotiating of our position with the people we’re talking with, because we assume that our position is not relevant. Why would it be? Sometimes, of course, it is, and we can understand that perfectly well, but it’s not constantly yoked with our thinking, and I think that is the grain of truth in the lack of theory of mind idea.

I believe the main difference between autistic people and non-autistic people is that we give a larger share to our current interests, whatever it is that we’re into. That’s one of the reasons we don’t have this other stuff yoked, because that uses a lot of processing resource and we don’t like using processing resource outside what it is that we’re currently preoccupied with. It’s because we are always at a football final. We don’t want interruptions, we just want to focus on this thing, which is in front of us now, and not have to worry about anything else. You don’t have to worry about supper, or getting the next beer.

We’re often accused of being abrupt, of interrupting, of disrupting, we’re very rarely accused of corrupting. People who are aware of etymology probably realise that ‘corrupt’ means getting together to rupture the flow. It’s getting together with others, whereas disrupt, interrupt, and abrupt are just about the kind of things that other people don’t like. Because they somehow get in the way of the flow, so they see them as breaking a flow that was desirable.

So that’s how come we’re productive irritants, because we are willing to do those things. We’re willing to be abrupt, and say that this flow is actually going in the wrong direction guys.

I wrote out a lot of words from the book, and cut them on pieces of paper, and combined them. Over there, it’s supposed to say ‘wildlife is my refuge’, ‘never disappoints like people can’, ‘So all that intoxicating, explosive aliveness can be absolutely trashed sometimes’, ‘I’m too old for my body to be seen skipping’. 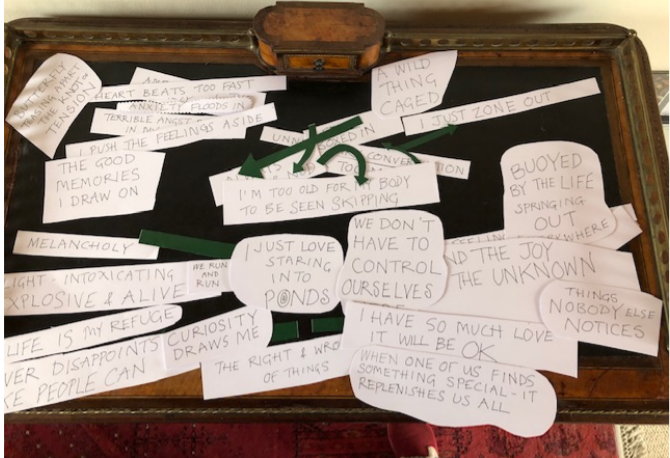 It needs to be recognised of goodwill and incorporated into people’s expectations, of what kind of humans they’re likely to meet in life: some people who may get very, excited about some stuff.

This young naturalist has two siblings, who are more obviously autistic than he is, and they flap and shout. All of them are aware of social stigma, and are at their happiest when they’re able to form a society amongst themselves, where they all go out, and appreciating the same aspects of nature.

So we’ve got this loyalty, authority, purity position, care, fairness, which is about reliability.

I want to just get back to this business of producing knowledge, of being involved in knowledge production – which we are – and making sure that it has some kind of authority. How do we make sure that we’ve got some kind of recognized value to the information that we are attempting to put before people? There’s a really difficult situation here, for making that happen.

Academic standards were never really designed to produce interesting, insightful truths. They were designed more and more to tick the boxes which will get everybody promotions. So that isn’t really available as a very useful resource, in my opinion. I think we’ve got to create some kind of a knowledge base that is recognised as having lasting value, as not being just invented. This sounds a little bit idealistic, however I just can’t see how we can build solidarity if we don’t have a foundation of shared truthfulness, of people having confidence that we’re all seeing the same, we’re all recognising features that are genuine in a shared world.

I think it’s really difficult, and I’m very worried about the way that the bureaucracy and the marketplace have just intersected. Corporate ownership of the operators of the state, and educational institutions, separately private police, private armies, unequal application of laws, unequal access to sources of health and well-being, excessive reverence for authority, perpetual surveillance, lack of personal autonomy for all but the elite, universities being obliged to beg from plutocrats and peopled by precarious workers owned by vested interests and governed by insecurity.

These are just a play on the words which have been common:

Look at how pervasive those kind of assumptions are.

Survival of comradeship when we don’t actually meet in the workplace, when we don’t have opportunities for feeling the solidarity in that way which is, kind of strangely, more connecting, and makes you feel special. Instead we’ve got an enormous number of routes towards expressing very similar ideas, which are only going to be seen by a limited number of people, which is really kind of depressing.

I didn’t realize how unreal money is now. I listened to this YouTube link, which lasts less than 20 minutes, and it’s just absolutely staggering, how there’s this kind of chain of complicated borrowing, with profits being made at various places, and it doesn’t appear ever to be really anchored to anything except belief systems.

Is that our way forward, to puncture the belief system? Or to provide a different belief system? What can we do about that? I don’t know if we can do anything about it.